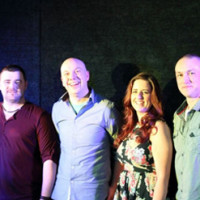 Rewired Live Band is a four piece cover band based in the Dublin/Kildare area. The band formed in 2013 and began performing in local venues and around the country. Over time the band has developed a positive reputation with each venue, with customers returning time and time again to enjoy their wide range of music from different eraÃ¢â‚¬â„¢s covering rock, pop, reggae, country and soul ranging from 50s to modern anthemÃ¢â‚¬â„¢s. They have also performed at various events such as Weddings, Birthday Parties, Festivals, Christenings, Debs Balls, Christmas Parties and Charity events. Rewired have a sound is unlike any other bands on the music scene today combining a multitude of various musical tastes to suit everybody, young and old and all totally live (no backing tracks). Through experience the band has developed a huge musical repertoire allowing them to base their set lists to suit all types and ages. We will take a timeless classic from the 50s 60s and put a modern twist on it. Not only can the band adapt to any audience but any venue or occasion. Only top of the range equipment is used for musical and visual presentation, such as our very own sound rig and our controlled LED lighting system