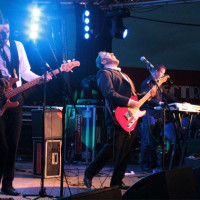 e Camembert Quartet are celebrating their 10th year as house band with Ryan Tubridy on his breakout show ‘Tubridy Tonight ‘ and for the last five years on ‘The Late Late Show’, where they have played with Russell Crowe, Michael Fassbender, Billy Ocean, Nile Rodgers, Jack Black, David Hasselhoff, Curtis Stigers, Jon Snow and Commander Hadfield. Quite apart from that, they are Ireland’s most polished live act, having backed Sinead O’Connor at the Lincoln Movie Premier and on her ‘For One Night Only Special’ while also being the late, great Joan Rivers’ House band (and fall guys) any time she played Dublin. They are the House Band at the Dublin and London Web Summits, they recently played Trafalgar Square to 60,000 people on St. Patrick’s Day and welcomed Katie Taylor home from the Olympics to 20,000 people in Bray. Their live set is brilliant, varied, musically accomplished and such a non-stop celebration that they are the go-to band for the biggest parties, corporate events and awards ceremonies here and in the UK.

The band specialize in providing high-quality musicianship and entertainment designed to get a crowd in a celebratory mood. Their set is the best around, they jump from style to style with total ease and their reputation as the best live band in the country goes from strength to